I made the somewhat last-minute decision to hit up Yosemite the day after I did my drive-through of Sequoia and King’s Canyon. The GPS was giving me conflicting advice about how long the drive would take from my Airbnb in Fresno.

I got on the road as the sun was coming up, trying to beat the crowds I could sense were forming.

Making minimal gas stops along the way, I made it into the park by 7AM. Knowing nothing about the park, I was simply following signs. I decided to take the turn up to Glacier Point, whatever that is.

This long and windy road took me first to a place called Washburn Point, something I found ironic because Washburn is a residential house at Smith. I took a some photos and took in the majesty of the overlook. I asked another tourist to take my photo, and through gestures, she suggested that I turn so that something else was in he background. It didn’t really matter to me because it was all beautiful. As I turned around and looked at the scene again, I notice a big rock that looked familiar. And its shape was so… dome-like. This was the moment I made the connection that I was looking at Half Dome.

Things were starting to click for me about how prominent of a park Yosemite is. I finally made it to and got a parking spot near Glacier Point. Everything about the landscape was beautiful. I found that the tourists were so much friendlier than anyone I’d met in the East. Without me asking, they’d offer to take a picture of me, accompanied by the suggestion that I feature the big selling points of the park in the background.

I rode back down the windy, mountain road and headed into Yosemite Valley. At this point, I was mostly looking for a visitor’s center. As I completely drove past all of the pull-offs for things like Tunnel View, I began recognizing my surroundings from the Apple-fed desktop backgrounds I’ve seen so much. And suddenly it clicked. 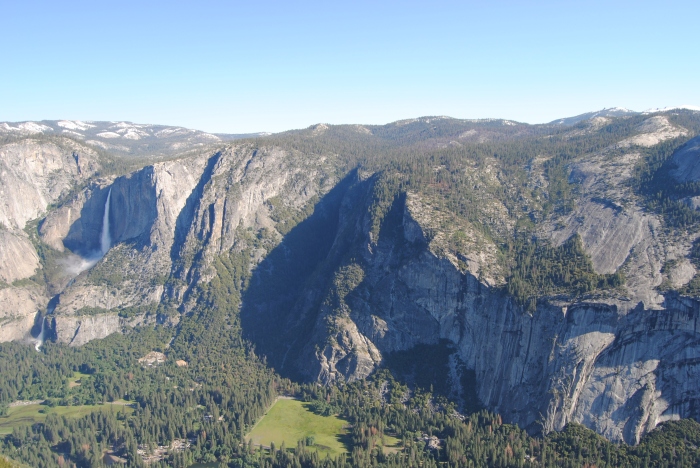 For the longest time, my MacBook Pro ran on Mavericks. I still thought the Sarah Palin joke was funny, nearly a decade after the election. I never updated my OS past Mavericks until my internal something-something disconnected just weeks earlier, and I had to have a smart person at the Holyoke Apple Store factory reset my laptop. Unfortunately, this meant no more Mavericks. I had Sierra, and everything looked different. Driving in Yosemite, I reflected on the names of the past OSs: El Capitan, Yosemite, and Sierra. They all had to do with the area I was riding around. This blew my mind.

That big granite wall I was facing was El Capitan. That dome-like structure has been featured regularly on my desktop background. This park’s name is Yosemite, located conveniently near the Sierra National Forest. Just California things?

The day I spent in Yosemite was probably its busiest day of the year: the Sunday before Memorial Day. I swear the entire population of California was in the park for the weekend, and the traffic reflected it. One of the lanes of the one-way loop through the Valley was used as parking because there were absolutely no other options. I wasn’t sure when I would run out of options, so I found a nice place to parallel park and stepped out of the car. I made the trek to the Valley Visitor’s Center, where I bought some souvenirs and waited to watch BOTH park movies.

I learned a lot about the park’s and the National Park Service’s history (and also became terrified of waterfalls) and was enthusiastic to walk around the valley more to get a feel of the magic of the park. I really only walked back to the car with my camera around my neck, but I really got the beauty and majesty of the giants walls and tall trees. This place has inspired so many people, and I feel honored to have shared in that experience.

I got hungry quickly, and the traffic wasn’t dissipating any time soon, so I got back to the car to wait through the traffic. It took nearly an hour to get out of the park, too late for the tamale place I wanted to try in Fresno (stay tuned for that moment of satisfaction one year later). I settled on Red Robin’s unlimited fries and went back to the Airbnb before making the long return drive to Death Valley in the morning.

My long weekend was successful in opening my eyes to California’s natural beauty and the joy I might one day find in exploring natural areas.

Yosemite was my 6th National Park.